Green Bay to Ourselves

10/24/2013 · by captainofadventures · in adventure, Captain of Adventures, photography · 2 Comments

Green Bay is a pristine little National Forest campground about 30 minutes outside of Sandpoint. There are eight or ten campsites on the water at these two rock beaches. Between the two beaches is a cliff of perfect proportions off of which to jump. The jump is just high enough to be scary but not so high as to be downright dangerous. This time of year however, the water has been drained nearly fifteen feet and is too shallow to huck oneself off of. And the water is somewhere in the 50 degree range with it being only 40 degrees outside.

Because of its pristine setting and proximity to town Green Bay is packed from May-September.

This July and August, our company took clients to Europe, with a principal destination being Croatia. Currently, Croatia is where everybody in Europe seems to be vacationing. Skinny speedos on big pasty Englishmen, skinnier speedos on skinnier old German men, topless Grandmothers, cigarettes galore, and beautiful people everywhere, the beaches of Croatia were packed. Yet, people were never obnoxious. Everyone was respectful, stepping carefully so as not to spray sand on your towel, speaking in hushed tones.

So, when Saturday afternoon Kim and I arrived at the parking lot and saw only one vehicle, we were overjoyed. We grabbed some of our gear and scouted a campsite. There is one campsite in particular which affords a beautiful and clear view of the lake (which is less than 20 paces away) from your campfire and tent. It was empty.

In the other vehicle a couple with two dogs had come to explore and let their dogs run and swim. Our buddy was scared of their two dogs (as is usually the case, even though he weighs 60 pounds). They left while we were unloading and setting up camp. The door to their car closed, the engine of their truck rumbled, the tires spun out gaining traction up the steep hill, and then: silence.

We had Green Bay completely to ourselves.

Quickly, we decided to go for a walk before the sun went down. After about twenty minutes we turned around at a bend in the trail. The most magnificent trees and fungus grew there. Kim and I though surely, something magical lives in these woods. 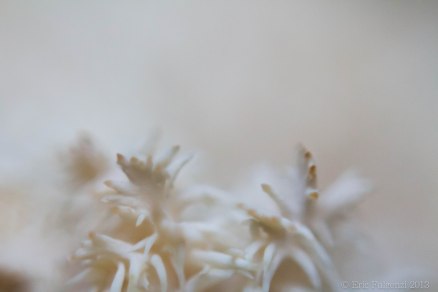 A crazy fungus. I reversed my lens to get this wonky macro shot.

When we got back to camp, the sun was just going down. 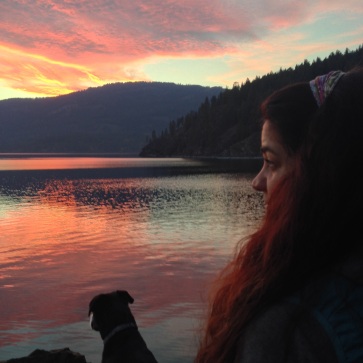 My darling and my dog gracing the frame.

After the sun had gone down, we set up our tent and I set to making a fire.

Not having bow-drilled a fire for quite some time, I saw this camping trip as the perfect opportunity to do so. Before I moved to Idaho, I was a guide at a therapeutic wilderness program called Second Nature Cascades. For nearly four years, every fire I made was started with sticks, a rock, and some bark. Not working there anymore, I embrace modern fire-starting techniques of course. The last fire I started was with white gas and a match. However, I figured it would be fun to bust a fire (that’s the nomenclature we used at Second Nature). So before we left I dug my busting set out of the basement and grabbed my bow from the shed.

I laid out all of the pieces of my set and realized that I didn’t have a pocketknife with me. You see, success with bow-drilling a fire is far more likely if the pieces used are whittled to reveal bare wood instead of the black glossy wood that comes after creating an ember.

Anyway, mostly because I was out of practice and partly because I forgot my pocketknife, I fought to start a fire for twenty fucking minutes. Bowdrilling is hard work. Finally, Kim suggested I go to the store about fifteen minutes away to get matches. I acquiesced and walked to my car, head hung in defeat.

As I pulled my bicycle out of the cab of my truck (I had forgotten my bike lock too…) resolve built inside of me. I put the bike back into the cab and marched into camp.

“Why not just go get matches?”

Five minutes later we were sitting next to a roaring fire.

An growing ember from a bow-drill fire.

The rest of the trip I am reserving for me and Kim. However, I will leave you with two photos from the night and morning. 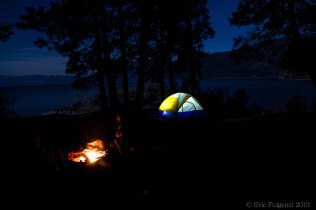 ← Being a Professional
Cover Shot! →

Find me here too:

This work is licensed under a Creative Commons Attribution-NoDerivs 3.0 Unported License.